BAKER-NORD SCHOLARS IN THE HUMANITIES: 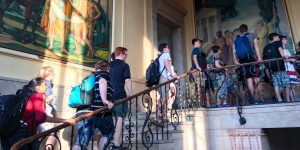 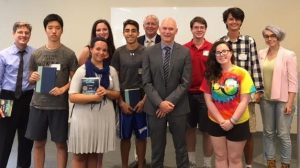 The purpose of the Baker-Nord Scholars in the Humanities program is to integrate incoming students into the life of the Humanities community at CWRU, offering them the benefits of a small liberal arts college within a leading research university.  It is intended to supplement their experience within the department of their future major and foster interdisciplinary connections across the campus and the community, including the rich cultural resources of Cleveland.  Students accepted into the program will be designated “Baker-Nord Scholars in the Humanities,” a designation that they will retain along with program benefits, for as long as they maintain good academic standing and proceed in a timely manner to declare a major in one of the affiliated Humanities departments.

Students who accept a place in the program will receive the following benefits: 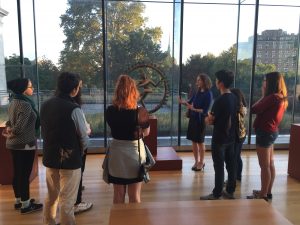 Panelists discuss how studying the humanities influenced their careers and answer questions from the audience. Panelists include:

Carlo Wolff (Boston University ’68) majored in English. He contributes news stories and features to the Cleveland Jewish News and writes book reviews for the Pittsburgh Post-Gazette and music reviews for DownBeat. He is the author of Cleveland Rock & Roll Memories (2006), and between 1990 and 2008 worked at Lodging Hospitality, a former Penton Media magazine where he was a longtime Features Editor.

Chris Sheridan (Yale ’89) majored in history. After graduation, she spent nearly two decades writing about education as a reporter and editorial writer in Connecticut and Cleveland before coming to Case Western Reserve in 2007 as President Snyder’s Chief of Staff. In 2011 she became Vice President for Marketing and Communications and Senior Advisor to the President.

Enrique Correa (Syracuse ’92) majored in history and political science. He is a multimedia journalist at Cleveland’s TV20, reporting on local events and performing public service announcements. He previously worked for FOX8 in Cleveland, as an entertainment reporter for BET Nightly News in Manhattan and at several stations in the New York City market.

Dan Moulthrop (UC Berkeley ’95) majored in English. CEO of The City Club of Cleveland and co-editor of Race Anthology: Dispatches and Artifacts from a Segregated City (2016), he helped to found Civic Commons, a Knight Foundation project creating a social media environment designed for civil civic dialogue. He has also worked as an on-air host and producer for WCPN and WVIZ and as a high school teacher.

View a recording of the event HERE.

Panelists discuss how studying the humanities influenced their careers. Panelists include:

Noelle Celeste (Yale ‘92) majored in American Studies. She is Director of Advancement for The City Club of Cleveland and Publisher of Edible Cleveland.

Todd Thompson (Kent State ‘95) majored in English. He is Director of Operations and Sommelier at Fire Food and Drink.

Nolan Konkoski (Siena College ‘05) majored in English. He is the chef and owner of Soho Kitchen and Bar with his partner Molly Smith.

Dinner will be served. Registration requested.

Amy Backus (Central Michigan University ‘79) majored in education with a minor in English. She is Director of Athletics and Chair of Physical Education at CWRU.

Alan L. Panteck (John Carroll University, ‘98) majored in Latin and Biology. An orthopedic surgeon at the Center of Orthopedic Surgery in Garfield Heights and Parma, he is also Team Physician for St. Ignatius High School.

Maximum Award: $250
Application Deadline: Applications are accepted on a rolling basis during the academic year.
Grants are available to undergraduate students in any of the departments affiliated with the Baker-Nord Center (Art History, Classics, English, History, Modern Languages, Music, Philosophy, Religious Studies, and Theater) to help defray expenses associated with a senior thesis or other research project not covered by departmental funding. Examples of eligible funding include, but are not limited to: travel to a collection; purchase of research materials; training in digital scholarship; server space; software; books or other materials.