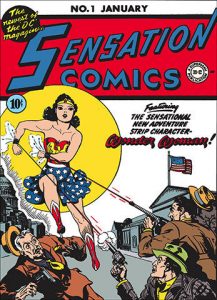 During World War ll, when the young men left their jobs to fight overseas, women took their places: in the factories, driving trucks and buses, building and flying planes — and in comics.  More women than ever before were drawing for comic books, and what they drew were beautiful courageous women who fought the Axis and didn’t have to be rescued by some guy.  In her talk, cartoonist and historian Trina Robbins, introduces four of those women, who fought the war with ink and paper.

The Goddess, The Iron Maiden and The Sacrilization of Consumerism in the Post Crisis Wonder Woman, 1987-1992

In 1987 Wonder Woman was revised as part of an overhaul of the DC Universe, in the Crisis on Infinite Earths story arc. In her lecture, Joan Ormrod, Senior Lecturer in Film and Media Studies at the Manchester School of Art, analyses the representation of Diana in George Perez’s revision of the character, Feb 1987-December 1991. Perez discarded her Diana Prince secret identity and Steve Trevor as love interest.  However, influenced by spiritual and feminist discourses of the mid seventies onwards, he made her into a Goddess-like fantasy figure split into two identities.  She is Diana, Princess of Themyscira a private, spiritual neo-liberal, but she is branded in consumer culture as Wonder Woman, goddess.  The discourses constructing Wonder Woman as goddess, however, clashed with other discourses circulating in popular culture and politics that aimed at disempowering female autonomy and highlighted paradoxes in Wonder Woman as female icon.

This program is co-sponsored with Kent State University and the Cleveland Public Library.

Click HERE for Plain Dealer article about the Symposium.