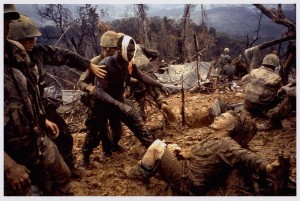 What is it about the experience of war that can ruin the lives of the men and women whom we send off to fight? The standard definition of post-traumatic stress disorder is too narrow to account for the psychological wounds inflicted in combat. In his keynote address Jonathan Shay discusses how culture, social systems, mind and body are all implicated when moral injury is the consequence of war. Shay is a doctor and clinical psychiatrist, who is best known for his books, Achilles in Vietnam: Combat Trauma and the Undoing of Character and Odysseus in America: Combat Trauma and the Trials of Homecoming, which compare the experiences of Vietnam veterans with the descriptions of war and homecoming in the works of Homer. Shay is the recipient of a MacArthur “Genius Grant” fellowship and the Salem Award for Human Rights and Social Justice.

Free and open to the public.  Registration Recommended.

Jonathan Shay is a clinical psychiatrist whose treatment of combat trauma suffered by Vietnam veterans combined with his critical and imaginative interpretations of the ancient accounts of battle described in Homer’s Iliad and Odyssey are deepening our understanding of the effects of warfare on the individual. His book, Achilles in Vietnam: Combat Trauma and the Undoing of Character (1994), draws parallels between the depiction of the epic warrior-hero Achilles and the experiences of individual veterans whom he treats at a Boston-area Veterans Affairs’ Outpatient Clinic. Reading the poem through the lens of modern experience, Shay rediscovers important nuances that traditional scholarship has often understated in the classical text, particularly that the Iliad is fundamentally a story about the frequently contentious relationship between soldiers and their leaders. In Odysseus in America: Combat Trauma and the Trials of Homecoming (2002), using Odysseus as metaphor, Shay focuses on the veteran’s experience upon returning from war and highlights the role of military policy in promoting the mental and physical safety of soldiers. A passionate advocate for veterans and committed to minimizing future psychological trauma, Shay strives for structural reform of the ways the U.S. armed forces are organized, trained, and counseled. Respected by humanists and military leaders alike, Shay brings into stark relief the emotional problems faced by military combatants and veterans, ancient and modern.

Jonathan Shay received a B.A. (1963) from Harvard University and an M.D. (1971) and Ph.D. (1972) from the University of Pennsylvania. Since 1987, he has been a staff psychiatrist at the Department of Veteran Affairs Outpatient Clinic in Boston, Massachusetts. In 2001, Shay served as Visiting Scholar-at-Large at the U.S. Naval War College, and from 2004 to 2005, he was Chair of Ethics, Leadership, and Personnel Policy in the Office of the U.S. Army Deputy Chief of Staff for Personnel.