Performance and Discussion of “Asking for It” 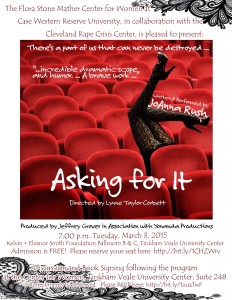 The Flora Stone Mather Center for Women, in collaboration with the Cleveland Rape Crisis Center presents Asking For It, which follows one woman’s hysterical and heart-breaking journey from “Outstanding Catholic Youth of the Year” to the stage of Radio City Music Hall and the cast of “A Chorus Line”. Tap dancing her way through rape, rehab, and wrecked relationships, Asking for It is a joyful kaleidoscope of faith and femininity, sexual repression and spiritual awakening. Rush portrays a colorful cast of characters ranging from uptight clerics to sexy chorines, and growing boys of all ages. Hilarious, irreverent and moving, Joanna Rush’s Asking for It leaves audiences – male and female, of all ages – invigorated and inspired.

A discussion and book signing will follow the program.

Admission is free, but reservations are required.  Register HERE.