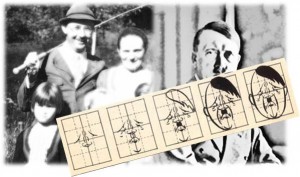 The Holocaust and its perpetrators have left a legacy of evil which has permeated our lives and culture like no other. This mini-symposium features two experts in Holocaust and Visual Studies who will explore visual images of perpetrators in art, literature, film and popular culture. Brad Prager, Professor of German and Film Studies at the University of Missouri, Columbia, will look at the use of photographs of Nazi relatives in order to cope with the National Social past within a German family. Michael Richardson, Interim Dean of Humanities and Sciences and Professor of German at Ithaca College, discusses current Hitler representations in popular culture, which find wide distribution on the internet. These images often satirize Hitler and his appearance, such as the phenomena of Hitler cat or the comic “Hipster Hitler.” Richardson will also speak to the moral and ethical questions raised by such representations.

This event is co-sponsored by the Max Kade Center for German Studies and The Department of Modern Languages and Literatures.