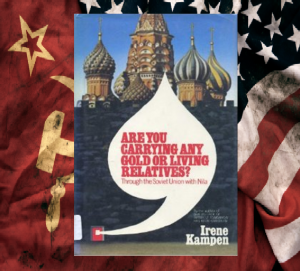 The American humorist Irene Kampen chronicled her eight-week sojourn to the Soviet Union in the summer of 1969 in her fascinating travelogue, Are You Carrying Any Gold or Living Relatives?, published by Doubleday in 1970. In his talk, Michael Metsner, a PhD candidate in the Department of History, focuses on a particular item neatly packed in Kampen’s luggage for her journey behind the “Iron Curtain”—the Polaroid camera. This modern exemplar of American technological innovation proved to be an irresistible lure for Soviets wherever and whenever Kampen used it in public, but there is much more to the story than simply Soviet enchantment with the latest American gadget.