From the Tigris to the Tiber: A Case of Babylonian ‘Astro-Medicine’ in Pliny the Elder 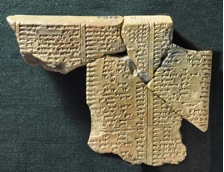 This talk will present and compare two texts — a puzzling late Babylonian Kalendertext written on a cuneiform tablet in Uruk by a scholar named Iqisa (late fourth century BCE), and a passage from the Natural History of Pliny the Elder (first century CE) concerning fever therapies. While at a first glance these two testimonies seem to have nothing in common, a closer examination of them reveals that Pliny was commenting on the specific tradition of pairing animal products with calendric/zodiac information as found in Iqisa’s text, and thus each is useful for the interpretation of the other. This finding represents the only identified direct proof of the sharing of astro-medical knowledge between the lands of cuneiform writing and the Greco-Roman world. As such, it has far-reaching implications for the history of ancient medicine and/or astrology.

Maddalena Rumor has a B.A. in Assyriology from the University of Ca’ Foscari (Venice, Italy), an M.A. in The History and Archaeology of Writing from the Venice International University, and an M.S.I. from the University of Michigan. Currently she is a Doctoral Fellow of the Wissensgeschichte TOPOI Program at the Freie Universität (Berlin, Germany), under the supervision of Professor Mark Geller. She is mostly interested in Ancient Mesopotamian Medicine, Pharmacology and Chemistry and is researching how these sciences related to neighboring Graeco-Roman cultures. For her dissertation within Topoi (E-CSG-III ‘From Technology to Science: The Spread of Knowledge’), she is focusing on the use/misuse of peculiar kinds of animal-based medical ingredients, known as Dreckapotheke, in Babylonian and Graeco-Roman healing.