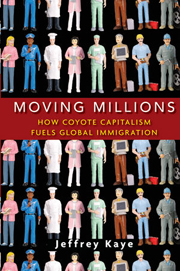 Journalist & author Jeffrey Kaye discusses the economic forces that promote and encourage immigration. The public in the U.S. and other industrialized countries tend to view the politically-charged topic through a legal lens, often seeing migration as a matter of personal choice. Kaye examines the policies of businesses and governments in both rich and poor nations to show how globalization and economic policies have helped create patterns of international migration.

Jeffrey Kaye is a freelance journalist, writer, and producer. He is the author of Moving Millions: How Coyote Capitalism Fuels Global Immigration (Wiley, 2010). He worked as a correspondent for the PBS NewsHour for 25 years and was a longtime contributor to “World Report,” the public affairs program of HDNet television. Kaye has traveled the world as a reporter, and is a frequent public speaker and commentator, chiefly on the subject of immigration.