Under Cover of War: The Armenian Genocide and Its Continuing Ramifications 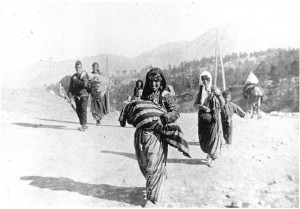 World War I provided the cover for the ultranationalist “Young Turk” dictatorship of the Ottoman Empire to take brutal measures to eliminate the native Armenian population. Not only did more than half of the Armenian inhabitants, 1.5 million perish, but the Armenian people was dispossessed of its homeland of several thousand years. Richard Hovannisian, Professor Emeritus at UCLA and Adjunct Professor at USC working with the Shoah Foundation, discusses the reasons for, and the continuing consequences of the Armenian Genocide, including its direct relationship to the Holocaust and other genocides.

Dr. Hovannisian serves on the board of 9 scholarly and civic organizations including Facing Ourselves Foundation and the International Institute on the Holocaust and Genocide. He is the author of thirty-five books and numerous scholarly articles, including 5 volumes on the Armenian Genocide and thirteen volumes on historic Armenian cities and provinces in the Ottoman Empire.

This event is co-sponsored by the Armenian Genocide Centennial Committee of Ohio.

Richard Hovannisian is Professor Emeritus of Armenian and Near Eastern History at UCLA, where he was the first holder of the Armenian Educational Foundation Chair in Modern Armenian History. He is the author of thirty-five books and numerous scholarly articles, including five volumes on the Armenian Genocide and thirteen volumes on historic Armenian cities and provinces in the Ottoman Empire.

Professor Hovannisian is a Guggenheim Fellow and has received many honors for his scholarship, civic activities, and advancement of Armenian Studies.  He is a founder and six-time president of the Society for Armenian Studies and has participated in numerous international forums and in the media on Armenian and Neat Eastern issues.