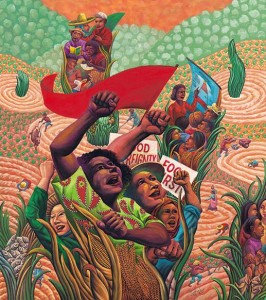 In his lecture, Eric Holt-Giménez, executive director of Food First/Institute for Food and Development Policy, will address the structural inequity and inherent unsustainability of our current food system and the role and challenges for the food movement in systems transformation.

This event is sponsored by the Baker-Nord Center’s Food and Communities Seminar Group, led by Nárcisz Fejes, and is part of the 2016 Food Week.

Eric Holt-Giménez, Ph.D. is the executive director of Food First/Institute for Food and Development Policy (July 2006—Present). Called one of the country’s “most established food think tanks” by the New York Times, Food First’s mission is to end the injustices that cause hunger, poverty and environmental degradation throughout the world. Food First believes that a world free of hunger is possible if farmers and communities take back control of the food systems presently dominated by transnational agri-foods industries.

A political economist and agroecologist, Eric grew up working on farms in Northern California and worked for over 30 years in international agricultural development. He has published many magazine and academic articles on agroecology, development, food justice and food sovereignty and is author/editor of several Food First books, including: Food Movements Unite! Strategies to Transform our Food System (2011), Food Rebellions: Crisis and the Hunger for Justice (2009) and Campesino a Campesino: Voices from Latin America’s Farmer to Farmer Movement for Sustainable Agriculture (2006) in which he chronicles his involvement with this movement in Mexico and Central America over two and a half decades. Eric lectures internationally and has taught undergraduate and graduate classes and courses at the University of California, Boston University, Antioch University in Colombia and The National Gastronomic University of Italy. He has a Ph.D. in Environmental Studies from the University of California—Santa Cruz and a M.Sc. in International Agricultural Development from University of California—Davis. At Food First, Eric’s research and writing has concentrated on the global food crisis, the U.S. Farm Bill, the expansion of agrofuels, land grabs, neighborhood food systems, the agrarian question and food movements. In his words, ​“Successful social movements are formed by integrating activism with livelihoods. These integrated movements create the deep sustained social pressure that produces political will—the key to changing the financial, governmental and market structures that presently work against sustainability.”