Faculty-Work-in-Progress – Italy by Way of India: Routes of Devotional Knowledge in the Early Modern Period 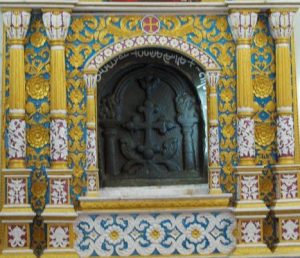 Travel between the vying reliquary sites of St. Thomas Apostle in Chennai, India and Ortona, Italy ruptured narrative continuity in the formation of his European cult while simultaneously fostering a thriving Indian culture of ‘Thomas Christianity.’ The arrival of missionaries and merchants from Italy and Portugal during the sixteenth and seventeenth centuries further complicated the homologous nature of so-called Thomas Christianity and resulted in the production of objects that merge Christian and Hindu iconographies in ways that are here elucidated for the first time. In her talk, Erin Benay, Assistant Professor in the Department of Art History and Art, sheds light on a little-studied chapter in the history of cultic devotion outside the conventional geographic parameters of the Renaissance and suggests an important instance of transcultural exchange during the early modern period.

Professor Benay is a specialist in early modern art, with a particular focus on Italian painting, sculpture, and printmaking c. 1550-1650. Her teaching and research interests include Caravaggio and the Caravaggisti; sensory perception, gender issues, and devotional art; the history of collecting and knowledge in 17th-century Europe; travel, ethnology, and visualizations of the ‘global;’ prints and printed matter 1500-1700; and the history of science and art. Professor Benay’s research examines the relationship of empiricism and the senses to early modern painting, the history of collecting in 17th-century Europe, and global currents of exchange and mobility in early modern cultural history. Together with Lisa M. Rafanelli, she is the author of Faith, Gender, and the Senses in Italian Renaissance and Baroque Art: Interpreting the Noli me tangere and Doubting Thomas (Ashgate, 2015). Her other publications include essays in Open Arts Journal, Arte Veneta and Faith, Gender, and the Senses in Italian Renaissance and Baroque ArtCaravaggio: Reflections and Refractions (Ashgate 2014). Her next book (under contract with Giles) will focus on Caravaggio’s Crucifixion of St Andrew at the Cleveland Museum of Art and reveals the ways in which imperial movement in part obfuscated ‘original’ locations of production, collection, and consumption, in this case between Italy and Spain. Benay’s current research project, Italy By Way of India: Routes of Devotional Knowledge in the Early Modern Period, will consider how travel between Italy and South Asia complicated the iconological construction of saints’ lives. Prior to joining the faculty at CWRU in 2012, Prof. Benay taught at the State University of New York, Oswego and at Marlboro College in Vermont. She was a curatorial assistant at the Currier Museum of Art in Manchester, New Hampshire, the Zimmerli Museum at Rutgers University, and at the Morgan Library in New York. She has been the recipient of a number of awards and grants, including the Samuel H. Kress grant in Renaissance Art History, and has been invited to speak at numerous conferences and symposia in the United States and Europe.