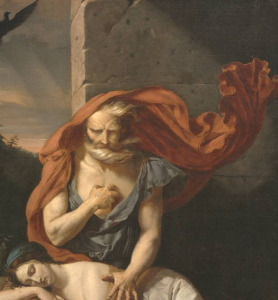 In her talk, Rachel Sternberg, Associate Professor in the Department of Classics, argues that Plato’s criticism of tragedy reflected a significant change he observed during his lifetime (c. 429-347 BCE):  that men were crying more freely than they had in his childhood and youth, a change he blamed (plausibly) on the emotionally stirring effects of poetry. Work by cultural anthropologist William M. Reddy can help us interpret this possibility via analogy with a shift that occurred in late 18th-century France as people learning empathy from an energetic new literary genre — the novel — became more sympathetic and began to cry much more than previously. Reddy theorizes that the moment created a new “emotional regime” that changed the entire culture. Sternberg suggests that in the fifth century BCE, an energetic new genre — tragic drama — taught empathy, drew tears, and changed the culture of Athens.