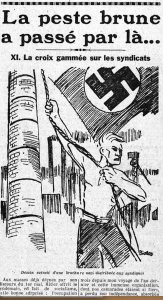 French writer and activist Daniel Guérin was one of many French journalists to travel to Germany in the early 1930s in order to report on the rise of Nazism. His first-person accounts of the months surrounding Hitler’s accession to power, published first in the press and later in book form as The Brown Plague, remain unique in their genre, however. Commissioned in part by French newspaper editor and rising statesman Léon Blum, Guérin rode his bicycle through a Germany in social and political upheaval, making contact with both German resistants and Nazi Party adherents. In this work-in-progress, Christine Cano, Associate Professor in the Department of Modern Languages and Literatures, considers Guérin’s newspaper articles within the context of the information press of the 1930s and suggests directions for a reception history of The Brown Plague in its multiple book editions and translations.