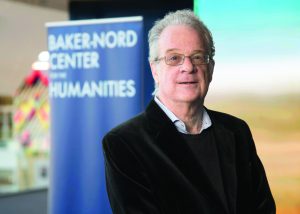 Many of those who have been skeptical about Jackson Pollock’s work have done a double-take when they’ve encountered Pollock’s early drawings after El Greco, which employ an analytical approach he learned from his first and only teacher, Thomas Hart Benton.  They reveal that Pollock’s mature work was based on a deep understanding of the compositional methods of the old masters.  Interestingly, they also shed light on El Greco’s own working methods, and on the factors that led to the invention of El Greco’s signature artistic style.

This lecture is presented by Henry Adams, Ruth Coulter Heede Professor of Art History and recipient of the 2018 Baker-Nord Center Award for Distinguished Scholarship in the Humanities, which recognizes the outstanding scholarship of Case Western Reserve University faculty in the Humanities and their contribution to the University’s reputation.

Click HERE to read the art/sci article about Professor Adams.

Henry Adams is the Ruth Coulter Heede Professor of Art History at Case Western Reserve University.  He is a graduate of Harvard University, and received his M.A. and PH.D. from Yale, where he received the Frances Blanshard Prize for the best doctoral dissertation in art history. He is the author of over 300 scholarly and popular articles, ranging over the American field from the 17th century to the present, as well as of about 14 books or book-length exhibition catalogues. Among these are Eakins Revealed, which the painter Andrew Wyeth described as “without question the most extraordinary biography I have ever read on an artist,” and Tom and Jack: The Intertwined Lives of Thomas Hart Benton and Jackson Pollock, of which Donna Seaman wrote in Booklist:

In 1985, Prof. Adams received the Arthur Kingsley Porter Prize of the College Art Association, the first time this had been awarded to an Americanist or a Museum Curator. In 1989, when he was a curator at the Nelson-Atkins Museum of Art, William Jewell College awarded him its distinguished service medal for his services to Kansas City and the Midwest. In 2001, when he was a curator at the Cleveland Museum of Art, he received the Northern Ohio Live Visual Arts Award for the best art exhibition of the year in Northern Ohio. In April 2010, The Beauty of Damage, a Tom Ball/Telos Production film that he initiated and scripted with Tom Ball won the Kodak Best Ohio Short Film at the 34th Cleveland International Film Festival. In June 2010 he received the Lifetime Achievement Award of the Cleveland Arts Prize. In 1989, in partnership with film maker Ken Burns, Adams produced a documentary on Thomas Hart Benton which was broadcast nationally on PBS to an audience of 20 million.