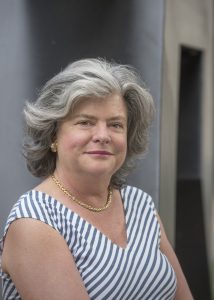 In 2004 the Cleveland Museum of Art acquired a rare ancient bronze statue of the type known as Apollo the Lizard-Slayer. In her lecture, Jenifer Neils, Elsie B. Smith Professor in the Liberal Arts in the Department of Classics, takes a deeper look at the style and meaning of this notable Greek sculpture and questions its identity as Apollo and its attribution to Praxiteles. If the Roman poet Martial is to be believed, it may have had an entirely different and sexually charged message for its Roman audience. Professor Neils is the recipient of the 2017 Baker-Nord Center Award for Distinguished Scholarship in the Humanities, which recognizes the outstanding scholarship of Case Western Reserve University faculty in the Humanities and their contribution to the University’s reputation.

Free and open to the public.

Jenifer Neils is the Elsie B. Smith Professor in the Liberal Arts at Case Western Reserve University.  In addition to teaching classical art and archaeology at CWRU since 1980, Jenifer Neils has guest-curated two major international loan exhibitions: Goddess and Polis: The Panathenaic Festival in Ancient Athens (1992), and Coming of Age in Ancient Greece: Images of Childhood from the Classical Past (2003), and edited and co-authored their catalogues. Her most recent books are The Parthenon Frieze (Cambridge University Press 2001), The Parthenon From Antiquity to the Present (Cambridge 2005), The British Museum Concise Introduction to Ancient Greece (London and Ann Arbor 2008) and Women in the Ancient World (British Museum and J. Paul Getty Museum, 2011). She has served as Vice-President for Publications of the Archaeological Institute of America and area editor for the 7-volume Oxford Encyclopedia of Ancient Greece and Rome (2010).

Neils has been a visiting professor at the University of California at Berkeley, Johns Hopkins University, and the American School of Classical Studies at Athens, a Resident of the American Academy in Rome, and Fellow at the Getty Research Institute. For six years she was on the curatorial staff of the Cleveland Museum of Art, where she organized numerous exhibitions and wrote the second volume of its catalogue of Greek vases. She is also a field archaeologist and has worked at Torone in northern Greece, as well as three sites (Murlo, Poggio Colla and Morgantina) in Italy. She is currently the chair of the Managing Committee of the American School of Classical Studies at Athens (2012-2016).